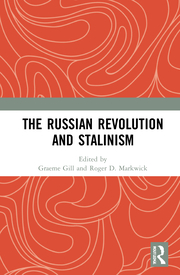 The Russian Revolution and Stalinism

AACaPS would like to congratulate their long-standing members, Emeritus Professor Graeme Gill and Professor Roger D. Markwick on their latest publication, The Russian Revolution and Stalinism. This book focuses upon significant aspects of Stalinism as a system in the USSR. It sheds new light on established questions and addresses issues that have never before been raised in the study of Stalinism.

Stalinism constitutes one of the most striking and contentious phenomena of the twentieth century. It not only transformed the Soviet Union into a major military-industrial power, but through both the Second World War and the ensuing Cold War, and its effect on the political Left throughout much of the world, it also transformed much of that world. This collection of papers by an international cast of authors investigates a variety of major aspects of Stalinism. Significant new questions – like the role of private enterprise and violence in state-making – as well as some of the more established questions – like the number of Soviet citizens who died in the Second World War, whether agricultural collectivisation was genocidal, nationality policy, the politics of executive power, and the Leningrad affair – are addressed here in innovative and stimulating ways.

The chapters in this book were originally published as a special issue of Europe-Asia Studies.

View all posts by aacapstudies

The aims of the Australasian Association for Communist and Post-Communist Studies (AACaPS) are to support the academic exchange and study of political, socio-economic and cultural issues faced by countries formerly belonging to the ‘socialist system’.
%d bloggers like this: